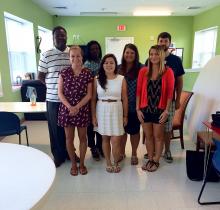 I worked with the non-profit organization Leading Into New Communities (LINC), a transitional program for the previously incarcerated, alongside two other students. We spent our time working on projects that would help LINC grow from within its walls and out in the community. We did recidivism checks in attempt to help LINC better understand how their program has affected its residents and discover how to better tailor to the needs of certain individuals who seek assistance. We were also able to set up in-kind donations from Panera Bread and establish connections with a few other food and hygiene businesses with the hope that LINC will be able to receive many donations that would support its program. The three of us were also able to increase LINC's marketing. We created a GoFundMe and raised close to $200 for LINC in the short four weeks that we were working closely with them and we spread word of LINC through the use of social media and through improving LINC's website. Our biggest project was that of a token economy. My classmates and I created a monetary system known as "Franks" (named after Director Frankie Roberts). The money they make will go toward their rent and the LINC Store. The LINC Store is where they will be able to purchase goods they aren't able to obtain on a regular basis, such as stamps, snack foods or stationery. We also created a banking system. The residents can hold up to 100 Franks on their person and the rest will be recorded into their individual checkbook transaction registries. By doing this, residents will be able to learn how to keep track of their finances as they would once fully integrated back into the community, and LINC will not have to spend all of their resources printing a large amount of Franks.

I have been working in Dr. Pond's lab for a year now. As the Spring semester was coming to an end, he asked if anyone was interested in completing a Directed Individual Study that would be cross-listed between the Psychology and Social Work departments. He informed us that we would be closely working with LINC to help them with their program's needs. As a Psychology and Criminology double major, I was very excited to work with a reentry program. I had not previously worked with such an organization and I hoped to be able to gain insight on how such a program was administrated and how it affects those who enter the program. I told Dr. Pond that I would love to be a part of the class. At the time, I was not aware of how influential we would be to the program, but I had hoped to make a difference and to learn from an administrative standpoint.

My experience working with LINC was amazing and greatly affected the way I view non-profit organizations. They are stressful to be in charge of, especially given the fact that many are severely underfunded and understaffed. It was difficult getting aspects of our projects approved when we couldn't find the Executive or Operations Directors, who were very busy. It is also difficult getting aid from others who are wary of helping those who have previously been incarcerated, but I learned not to give up. I learned that hard work and dedication to a project, a program and people who are counting on you outweighs the challenges that are faced. Social Work and Psychology are beneficial to the lives of others, especially those who are not able to find their way in society without a little bit of assistance. Those two fields of study encourage openmindedness and a supportive nature. I now know the importance of organizations like LINC and have gained experience in how to improve such a program in a way that is not just beneficial to the facility, but also to those it assists.

In what way will this experience make you a more viable candidate when you are seeking a job or applying for graduate study?:

Engaging in a project such as this that combines field experience, service and research is unparalleled. This type of experience is necessary to attend graduate school and allows individuals to stand out from other applicants. Having experience working with a non-profit organization and making changes to that organization will be viewed highly and be well-recognized by internships, graduate programs and businesses. Such an experience also increases self-confidence in the work force, as it is a hands-on application of what one has been learning in a classroom. Completing a Directed Individual Study shows a willingness to go above and beyond what is necessary to graduate with a Bachelor's degree and shows a desire to change and be a part of the world, not be sheltered from it.

College of Arts and Sciences

Summaries of projects at LINC

Items residents will be able to purchase aside from rent